Harry Potter: A History of Magic: An Audio Documentary 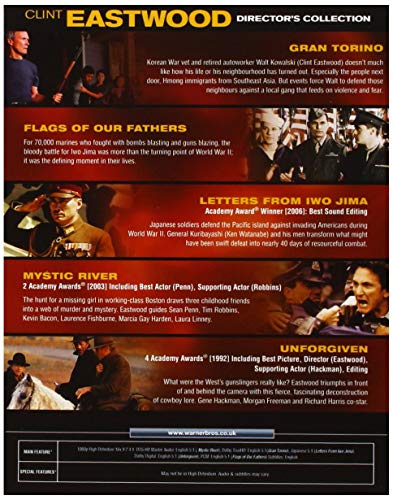 In “Gran Torino” (2008), curmudgeonly Korean War veteran and racist Walt Kowalski (Eastwood) catches Asian teenager Thao Vang Lor (Bee Vang) trying to steal his prized 1972 Gran Torino car. He then sets out on a personal mission to bring him into line – an act that causes waves throughout the gang-dominated neighborhood.

“Flags of Our Fathers” (2006) is based on the book by James Bradley and Ron Powers. In February 1945, even as victory in Europe was finally within reach, the war in the Pacific raged on. One of the most crucial and bloodiest battles of the war was the struggle for the island of Iwo Jima, which culminated with what would become one of the most iconic images in history: five Marines and a Navy corpsman raising the American flag on Mount Suribachi.

“Letters from Iwo Jima” (2006) is based on the book “Picture Letters from Commander in Chief” by Tadamichi Kuribayashi. The island of Iwo Jima stands between the American military force and the home islands of Japan. Therefore, the Imperial Japanese Army is desperate to prevent it from falling into American hands and providing a launching point for an invasion of Japan.

“Mystic River” (2003) is based on the novel by Dennis Lehane. Set in the Irish community of Boston, it tells the story of three childhood friends who have drifted apart over the years owing to a violent and disturbing experience they shared as children, and are forcibly reunited many years later following another tragic event.

“Unforgiven” (1992) is a gritty Western set in 1880s Kansas. Aging gunslinger-turned-farmer William Munny (Eastwood) reluctantly agrees to come out of retirement to help “The Schofield Kid” (Jaimz Woolvett) collect the bounty on a wanted murderer.